”Kim Mehmeti”’ (born [[1955]]) is a leading and innovative prose writer from the Albanian community in [[Macedonia]]. He was born in Gërçec near [[Skopje]], where he now lives and works.Long-time head of the Skopje-based Centre for Multi-cultural Understanding and Cooperation(CMUC)that has been systematically working on development of multiethnic and civil society in a complex Macedonian situation, gathering both Albanians and Macedonians for its program.
Worked at the Open Society Institute Macedonia (SOROS).
So he was also an editor of the independent information network work AIM, in which both Albanians and Macedonian co-operated.
Now working with the International Foundation for Culture. Member of the Independent Writers’ Association of Macedonia.
In March 2000 it created the independent weekly paper Lobi in Skopje together with ISO Rusi, for which it also writes,the leading independent Albanian-language weekly in Macedonia.
He has been deputy General Director of state Macedonian Radio Television(MTV).

He is the author of eleven volumes of prose.
He has compiled the anthology Albanian Short Stories, 1997. Awards: National Award for best prose book in Albanian for his collection Fatushe’s Destiny.One of his novels has appeared in German, Das Dorf der verfluchten Kinder (The Village of the Damned Children), Klagenfurt 2002.Mehmeti also writes in Macedonian and translates between the two languages. 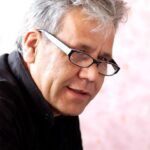